The 560 is the third generation Roomba and PCMag calls the Discovery “souped-up” because it has a bigger chassis, wheels and better suspension.

This was the first Roomba to have an anti-tangle feature where the brush would rotate backwards to loosen itself from any loose tassels or wires, and while it can be scheduled, it doesn’t have a remote control.

iRobot claims that you can clean up to 4 rooms. This is only possible if you are using 4 virtual beacons instead of the 2 virtual walls included in this package.

However, many online reviews claim otherwise that it had some trouble moving from room to room in addition to finding its own charging dock.

The battery often runs out when doing this. You can read more of that in the reviews section.

Update September 22, 2017: Since I posted this post a few years ago, iRobot has new robot vacuums like Roomba 650, 860, 960 and 980. Click on the links for more information . These newer cleaners have smarter portability and better cleaning performance.

What do you expect from the iRobot Roomba 560?

From Roomba 560 onwards, iRobot has made significant improvements in terms of performance and reliability.

The 560 is the first Roomba to use a modular design which means parts are easy to replace. Cleaning performance has also taken a quantum leap in addition to its long-term viability.

In the package you will get 2 virtual walls and an additional filter. The filtration system traps allergens according to iRobot but is not a HEPA filter.

Like all Roomba vacuums, it has two brushes that rotate oppositely – one agitator and one bristle brush.

To give you a better understanding of how the Roomba navigates without the need for technical sounding, take a look at this illustration.

You will notice that it is very similar to the 700 series but the basic design of the sensors remains the same.

I also found a great long exposure photo that shows you the cleaning pattern. 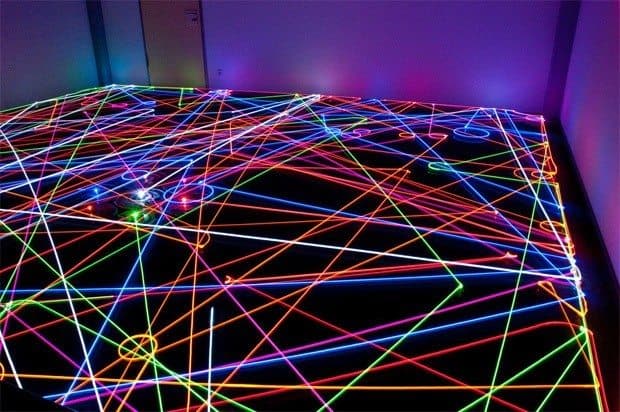 Remember I said iRobot can clean up to 4 rooms without any help?

Well in theory it could be based on so many reviews like this one on geek.com it tends to miss the beacon and walk out room and more complex layouts it will have a hard time finding its charging base.

It can still clean multiple rooms if you remove the virtual wall but it will be much more difficult.

One of the videos in the Watch it in action section tried multiple room cleaning minus the virtual wall and the result was positive.

Yes, you can schedule this to clean independently once a day, seven days a week. However it does not have a remote control.

Normal charging time may take around 3 hours but iRobot recommends charging this for 16 hours on its first use.

One of the improvements the 560 brought to the Discovery was the use of a modular design. This makes replacing parts easier.

The areas that need frequent brushing are the side brush and counter rotating brush which tend to pick up a lot of pet hair. This is a necessary step in order not to quickly damage these parts.

Here is a video detailing how to clean the 560 …

The Robot Shop tested the uptime and said it lasted just over two hours which is a pretty good number considering this robot uses a NiCad battery.

It does a good job on bare floors but due to its poor suction, you’ll have a hard time picking up lighter debris like pet hair, paper, or something similar.

It does a good job with heavy debris like nuts and bolts.

Spring-loaded wheels and adjustable brushes make this suitable for thinner and thicker carpets but don’t expect too much in terms of deep cleaning due to poor suction.

Don’t rely on this as your main cleaner but only as a maintenance broom between deep cleaning sessions so you don’t have to haul that heavy weight upright too often.

It will work well on most carpets from thin to thick, and although there are some complaints about it not working on darker rugs/rugs, video reviews reveal otherwise.

The counter rotating brush will do most of the work in picking up pet hair and has done a fairly decent job based on the reviews.

Note that the dirt bin is not large so you will need to empty it often if you have a lot of pets.

If you have two or more pets at home, you may want to consider the newer Roomba 650.

It scores highly when it comes to cleaning and the scheduling feature is another one.

It was also able to pick up pet hair quite well based on these reviews, but the dirt box filled up fairly quickly, especially in the first few rides because the floors tend to be dirtier during this stage.

The first and most common complaint is the side brush breaks after a few months (some 4 and 5 star reviews mentioned this as well).

Secondly, he had trouble getting back to the charging base.

Finally, there were also complaints about product failure during the first year of ownership.

Over 40 people left a review here and it rated higher than Amazon. Reviews were similar to those on Amazon, and consumers were happy that it had scheduling, reached areas under the furniture and did a good job picking up debris.

There was also one consumer who pointed out that the 560’s gearbox is completely locked allowing dust and dirt to get into the gear which is one of the culprits in it crashing a lot.

You can buy this robot from Amazon but it will cost you over $1000!!! The best option in my opinion is to get the newer Roomba 690 which will cost much less. This alternative will be eligible for free 2-day shipping if you join Prime.

You can also buy extended warranties of up to 3 years if you want the extra peace of mind.

This robot is great for people who live in small to medium sized homes looking for an affordable robot vacuum.

And don’t mind the lack of premium features like a bin full indicator, remote control, and virtual beacon.

The cleaning performance is great thanks to the counter rotating brushes but they require some maintenance to run smoothly.

It will take about 20 minutes to clean a medium sized room, so don’t bother watching it, just let it do its work.

The dirt bin is small so you will need to monitor this manually as it does not have a bin full indicator.

It might also be a good idea to buy additional side brushes in case the brush that came with them breaks, as many consumers have complained about this in reviews.

Overall, this is a good robot vacuum cleaner that does a good enough job of maintenance and cleaning.

Unfortunately, iRobot has discontinued this product and warranty claims may be an issue, you may want to take a look at the latest 650 if you are looking to buy a mid-priced Roomba.