The Presto BH20090 is a hand vacuum installed in the body of the vacuum cleaner, a concept that gives you two products in one package hence the name 2-in-1.

The stick part comes with a rotating nozzle that makes it easy to move it around obstacles.

The handheld part comes with 3 attachments that include a crevice as well as a dusting and upholstery tool for cleaning areas other than the floor.

One of the concerns with these types of products is the suction power.

Since the portable device is installed inside a stick vacuum, you will only have portable power on the vacuum cleaner.

Judging by the reviews, it has good suction but not enough for a deep clean, great for bare floors, not great on carpet.

What to expect from the Hoover Presto 2-in-1 Cordless Stick Vac BH20090?

This device is powered by a 14.4V nickel-cadmium battery which takes about 6 to 8 hours to fully charge which is about 50% less than most other cordless cleaners that use the same type of battery.

Filtering Dirt From Back Out A HEPA filter that prevents 99.7% of allergens from going back out – allergy sufferers have a look at this.

The dirt container is a bit small for the stick due to the handheld dirt cup being used. So don’t expect it to contain a lot of debris.

The length and swivel nozzle make this a good floor cleaner plus it has a motorized brush that makes it great on hard floors.

Edge cleaning struggles a bit because the brush doesn’t reach the edges but a handheld device will take care of that more or less. 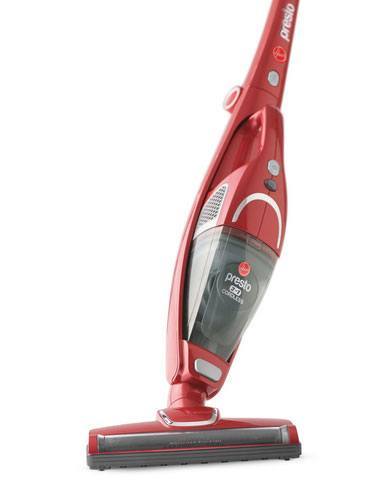 Like I said, the length and swivel nozzle would make this a good carpet cleaner but it lacks the ability to clean a medium to dense carpet even though it does have a motorized brush.

Remember that this is basically a handheld device that is stored inside the body of the vacuum cleaner, so anticipating a vertical force is quite demanding.

It does a fairly good job on rugs and low-pile rugs as shown in this video.

Because it has a motorized brush that can clean pet hair but there are some concerns.

First, the longer strands of hair will get stuck to the brush that will need regular cleaning, but fortunately, Hoover is easy to remove the brush.

Second, the upholstery nozzle opening is narrow, so pet hair tends to build up in this area and that could become a bottleneck here.

Note that even without the upholstery accessory, the portable device can be used to clean pet hair on its own. 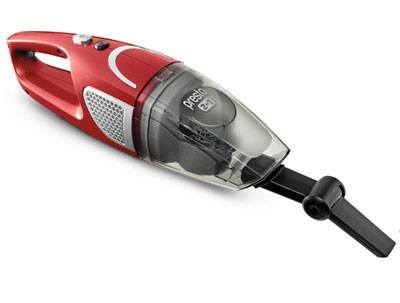 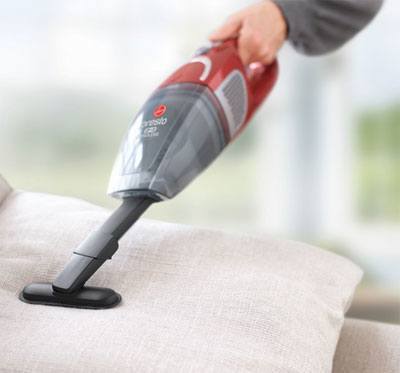 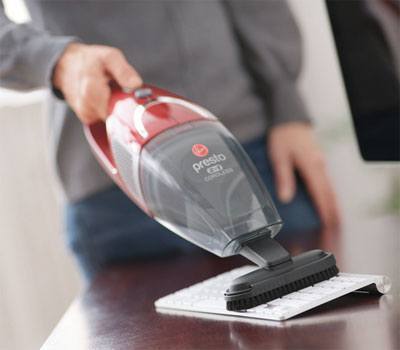 For the first 3 or 4 uses it should charge for about 12 hours then after that it goes down about 6 to 8 hours.

Note that it does not have any indicator light that lets you know when the battery is full so it is best to set a timer for this.

The HEPA filter can only be rinsed after air drying for 24 hours and I would suggest getting an extra filter so you can use the extra filter while the other one is air dried.

Just rinse it and do not wash it with detergent.

Before emptying the dirt cup, manually separate the portable device from the stick housing. Make sure to hold it with the nozzle pointing up so dirt doesn’t fall out of the nozzle.

Press the release latch directly next to the power switch to remove the filter above the dirt cup and then empty the dirt cup into the trash.

While you’re at it, check the cyclone separator for any dirt stuck to it and clean it if necessary.

Hoover says to expect to get about 8 to 10 minutes.

While most consumers didn’t mention uptime numbers despite one review on Amazon even though it said it lasted about 10 minutes, other reviews reported that one charge was able to clean between 1,200 and 1,500 square feet.

Hoover will give you a one year warranty and will replace the defective units.

Nearly a hundred people left a review on Amazon and the majority gave it a 5-star rating saying it had good enough suction, decent runtime, maneuverable, easy to empty, and lightweight, and it saved them money because they didn’t need to purchase a separate portable.

This product was basically all they needed but it is important to note that most consumers who gave 5 star reviews here used this mostly on hard floors and had minimal carpeting in their homes so the suction power wasn’t a huge issue.

The Presto has also had its share of bad reviews, and the complaints here have been a lack of suction power, a small dirt cup, and the battery not charging.

A small percentage received lemon units which is quite normal in the industry although one customer stated that even the replacement unit that was sent to him was also experiencing the same issues as the previous unit he received.

Only 10 people left a review and the pros and cons here were similar to those on Amazon.

People who gave this positive rating said it had good suction power, light, and a decent runtime (although they didn’t say how long). Negative reviews indicate that it did not have enough suction and that the uptime was poor.

Nearly 40 people left a review here and of those 84% would recommend this to a friend because it was lightweight, had good suction on hard floors, could pick up pet hair, was easy to empty and was so versatile. Consumers who gave negative reviews said that it had poor suction and that the dirt container was too small and needed to be emptied often.

You can buy this 2-in-1 handheld stick vacuum cleaner from Amazon for less than $90. And you’ll be eligible for free 2-day shipping if you join Prime.

This versatile, lightweight and smart product would be great for people who have small to medium sized homes with mostly hard floors and less carpet space.

Having a handheld device also allows you to use this on upholstery, baseboards, tables, and other more difficult to reach places.

If you suffer from some form of allergy, take a long look at this one as it has a HEPA filter.

Charging takes about 6 to 8 hours but that’s still 50% less than most other nickel-cadmium-powered vacuums on the market. Although the filter is washable, consider getting an extra filter to reduce downtime as you need 24 hours to air dry.

Overall, this is a good product that may not meet everyone’s needs because it has some glaring limitations – a small dirt cup and a lack of ability to effectively clean carpets.